Quick Question August 2022 Results: Why will you or won’t you participate in FTD research?

Quick Question August 2022 Results: Why will you or won’t you participate in FTD research?

According to the August 2022 Quick Questions survey, people participate in FTD research because they want to find treatments and a cure for FTD.

According to the August 2022 Quick Questions survey, the No. 1 reason people participate in FTD research is because they want to find treatments and a cure for frontotemporal degeneration (FTD).

The question was answered by 633 people. There were 533 people who shared reasons they will participate in FTD research, and 100 people told us why they would not participate.

People were not asked if they had enrolled in a study. However, several indicated through their write-in answers that they were current or past research participants.

Those who answered the August question represented 20 countries. Some indicated that because they lived outside of North America they could not qualify for studies, while others indicated that there were no studies for their specific diagnosis in the country in which they live.

The top four countries represented were:

Those who indicated the reasons they would participate in research greatly outnumber those who noted they will not participate.

The following charts and lists are based on a total of 633 submissions.

Responses from people willing to participate in research

Those who selected “Other” for why they would participate in FTD research were given the option to write in their reasons. Their motivations for saying “Yes” fell into these categories: 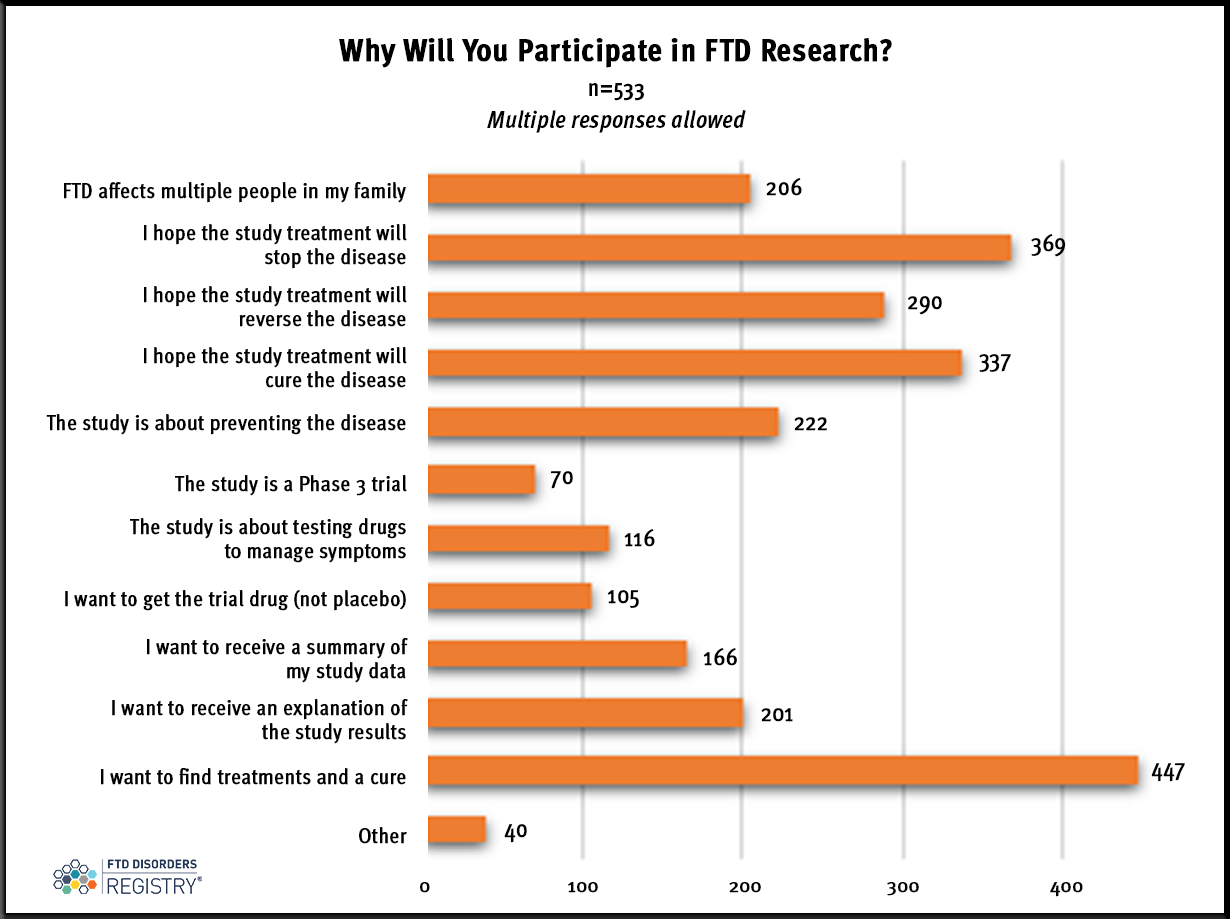 Responses from people who will not participate in research

The greatest reason that prevents people from enrolling in FTD research is when the disease has progressed too far. In addition, there were several other issues people selected that made trial participation too difficult for them.

Those who selected “Other” were given the option to write in their reasons for not participating in research. Many of their reasons could be grouped into these categories: 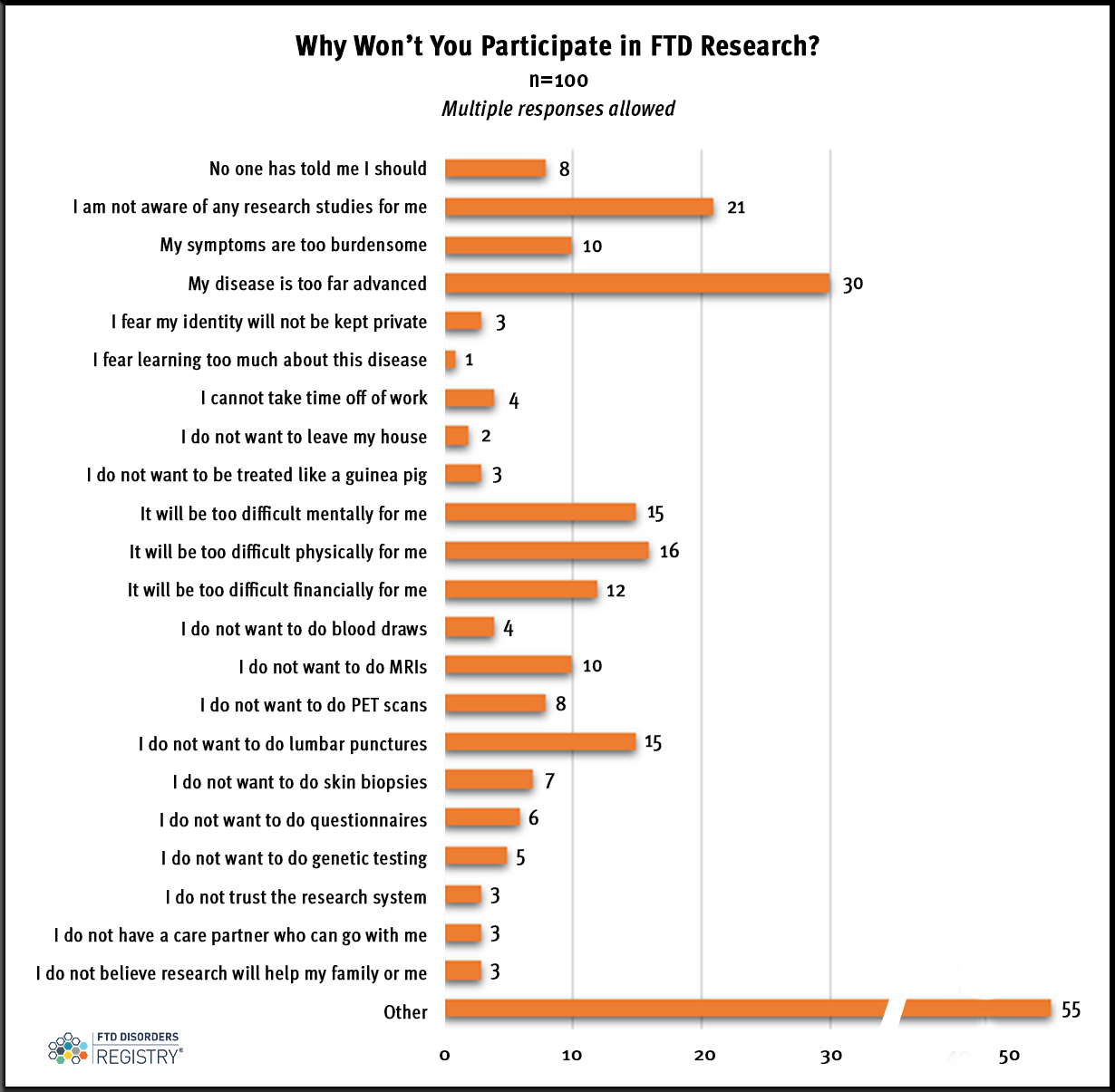 People were asked to indicate their relationship to the FTD-diagnosed person when answering the poll and whether they were answering for themselves or their diagnosed loved one.

Here is the breakdown of those who answered the August question: 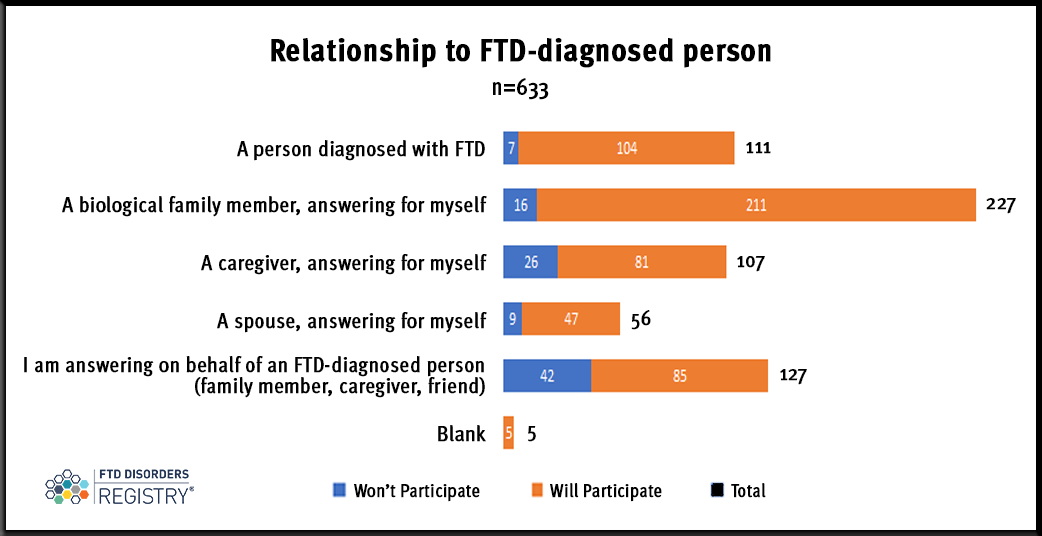 TOGETHER WE CAN FIND A CURE FOR FTD

The FTD Disorders Registry is a powerful tool in the movement to create therapies and find a cure. Together we can help change the course of the disease and put an end to FTD.